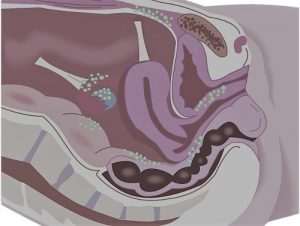 First of all, let me say that endometriosis is very hard to get rid of. Having said that, it is just hard, but very doable. It is an overgrowth of the uterus, or very possibly the uterus and ovaries that signifies a stagnation of that area. So the question around reversing the condition is not whether you can get rid of it.  It is, rather,  whether the stagnation can be eliminated.

I always remind patients of the old Chinese medical maxim that: “Where you have a flowing stream, nothing grows,…but as soon as it becomes a pond, everything grows.” Of course, the implication is that the area around the uterus has become a pond filled with overgrowth. This is not a very nice picture.

When a woman has endometriosis, there is a fairly good chance that she has some level of blood stagnation. We see the outcome of this in periods that are not only brutally painful but are dark and clotty as well. This can be the result of a couple of causes.

Many times we can trace the onset of endometriosis to contusions of either the physical or emotional sort. Often, a patient will recall a major car accident or sports accident that happened just months before the periods started becoming more painful. These can be likely precursors to the eventual overgrowth. Then too, just as easily we can see a protracted period of stress with the same eventual end.

What Blood Stagnation Is

In high school, when I was in football, I kept getting hit in the same place which eventuated in a very bad bruise. Medically, it is called a hematoma. They injected it with some kind of thinner to break up the blood clot. When someone gets into an automobile accident, this very same thing can happen, except that the whole body may get shaken.

This may cause an overall clotting of the blood or thickening of the blood, more intent on a clot. In the old days of Chinese medicine, they thought of the uterus as a cup, called the “Tang-kuei. ” They thought that this would fill up over the course of a month and naturally spill over. We have to say here that the Chinese were not allowed the sacrilege of cutting into the body. so they created empirical analogies which we still use today. They theorized that when the blood tends to clot, it is like this thickened blood forms a tight lid over the cup. This takes a great force to emerge into onset, which of course represents the pressure and pain.

The Connection With the Liver

This can also be implicated in a longer period with more profuse uterine bleeding. This is because once so much force gets the ball rolling, it is hard to stop. When the cause of the blood stagnation is too much emotional stress, we are often treating the liver as well. A good portion of the time, this is the rationale for a hysterectomy.

This is a bit involved, so if you can just stay with me for a bit, I think we can make this somewhat clearer. The liver has many faces. It is the governor of the blood and in normal happy circumstances makes sure that the blood flows smoothly throughout the body. When the liver is not in good working order it’s outward representation can be anger.  If we are repressed an inner frustration or resentment can happen; same difference. These emotions could certainly block the feeling of completely free flowing Qi or Vital energy.

This Qi is responsible for the movement of blood, and blood is responsible for anchoring the Qi. In these times of emotion, the Qi can stop or at least become halted. If this were just an interlude of emotion, it would probably become inconsequential.  But when it becomes more protracted, this stagnating of the emotions equates to stagnating of the Qi.  Eventually, this stagnates the function of the liver and the blood as well which causes this clotting, pain, and overgrowth of the uterus.

Another anomaly, and again most probably the result of extreme emotions is a prolapse of the stomach. In medical terms, a prolapse means sunken or fallen. In this case, the Qi of the stomach is usually interrupted by the emotion of worry or over-thinking. The stomach falls down lower in the abdomen as a result. I write about this as a causative phenomenon a lot as it can be implicated in many chronic disorders.

In this case, the prolapse can cause a congestion of space in the lower abdomen. As it rests on the Sigmoid Colon of the large intestine, it can cause constipation of a sort. Over time it can cause pressure on the bladder or even bladder prolapse, not unusual in older women. It can also cause a compression of the circulation of blood through the areas of the uterus and ovaries.  This can eventuate in the stagnation of blood and energy that we call endometriosis. What we have to do in this case is employ a course of Nesshi Therapy to lift up the stomach and address the resultant stagnation of blood and energy.

In Chinese medicine, anytime we are dealing with sexual function or sexual organs, in some way or another we can be dealing with kidney energy. As it is the very base energy of the body, when it is less than dynamic, we learn to recognize it in many different ways. We see this energy in two parts, yang energy, and yin energy. If we are yang deficient, we would be cold all the time. Moreover, yang is the dynamic representation of Qi, the warming and free-moving form of our body’s energy. If it is lacking, this energy may begin to slow down which eventuates the slowness of the blood. This deficiency is often seen as a state after an extenuated time of prolonged periods which eventually weakens the body.  So, it is hard to say whether the weakened state of the patient is a cause or a result.

Peculiarly, a yin deficiency is more often implicated in the resultant endometriosis more directly. The blood not only warms the body, it cools it as well. Actually, we consider blood to be a substrate of yin and so it is this liquefying portion of blood that actually cools us, especially at night. Of course, it follows that if the blood is less liquefied, it is less able to cool and more likely to stagnate over time. This stagnation could result in things like varicose or spider veins, coronary occlusions, or atherosclerosis.  In this case, because it concerns endometriosis, it may happen in a more dynamic place when we are younger, our reproductive organs.

In western medicine, the doctor is going to offer you birth control. This makes your body feel that it is already pregnant and sort of skips the period altogether. They may try an ablation, which means that they practically go in with lasers and cut the overgrowth out. Eventually, it grows back and then eventually they are going to suggest the final solution, a hysterectomy. The consequences of this can be emotionally far-reaching.

Regardless of which stopgap solution you may choose in this regard, the causative imbalance in your body is still creating problems.If it were just about your period, it would be one thing. But what caused your endometrial problems are still problems and causing other things.  You are thereafter living life as an adapted human being. You have to be a person still interested in achieving your maximum human growth potential. You can use this as a launching pad for a more balanced you, both physically and emotionally.

Articles The Uterine Connection Part 1: It Should Be Saved Sometimes I come home a little down because a female patient isn’t responding to treatment as she should.  I don’t like to discuss cases too…

Your Right Side – Your Liver